On August 28, 2012 the group released their first full-length project together, a mixtape titled Lords Never Worry, which received mostly mixed to negative reviews by critics. In August 2013, it was announced A$AP Mob's upcoming debut album, would be released on October 15, 2013, however that would later be delayed. They subsequently released their debut single "Trillmatic", in December 2013. The song, performed by A$AP Nast, is an ode to 90's hip hop and features a guest verse from Method Man. Their debut album, titled L.O.R.D., was set to be released in 2014, however the album was shelved.

On January 18, 2015, A$AP Mob founder, Steven "A$AP Yams" Rodriguez, was found dead at the age of 26. The cause of death was ruled acute mixed drug intoxication. 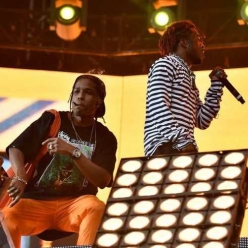 ASAP Mob Feels So Good Live on The Tonight Show