Nir Tibor (Hebrew: ניר טיבור‎; born 18 June 1993), known professionally by his stage name Dennis Lloyd, is an Israeli musician, producer, singer, songwriter, and multi-instrumentalist. His 2016 single, "Nevermind", has charted in several countries including Germany, Switzerland, Canada, the United Kingdom and the United States and was certified platinum in Italy, Canada, Germany, and Switzerland.

Nir Tibor was born[1] in Tel Aviv, Israel, to a family of Jewish descent. He grew up largely in the Ramat Aviv neighborhood of the city. Lloyd learned how to play the trumpet at age 8 and taught himself to play the guitar at age 13. He attended the Thelma Yellin High School of the Arts in Givatayim.[2][3]

Lloyd released his first single, "Playa (Say That)", in mid-2015. Toward the end of 2015, he moved to Bangkok, Thailand where he stayed for a year. During his time in Bangkok, Lloyd focused exclusively on music and wrote 35 songs.[4][5] After his year in Bangkok, Lloyd returned to Israel where he began releasing more music including the songs, "Snow White" and "Nevermind (Alright)".[6][7] Lloyd remixed the latter song and released it as "Nevermind" in the winter of 2016.[2][3] The remixed version quickly garnered success on Spotify, eventually peaking at number 4 on the Spotify Global Viral chart.[7][8] It would eventually accumulate more than 400 million streams on Spotify and over 1.5 million Shazams.[9][10] In June 2018, Time listed it as one of the "songs of summer".[11]

In June 2017, Lloyd was featured in a video on the German "COLORS" YouTube channel, performing an acoustic version of his song "Leftovers". The video has accrued 26 million views.[2][12] In March 2018, Lloyd announced the MTFKR Tour that began in May 2018 in Italy with dates across Europe and North America.[13][14] The song "Nevermind" was featured for the release of the new BMW 3 Series in the UK in 2019. 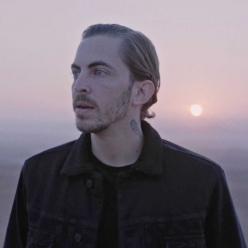