Mary Danielle Lambert (born May 3, 1989) is a Seattle-based singer, songwriter and spoken word artist. She worked with Macklemore and Ryan Lewis on a track on their album The Heist. Lambert is the featured artist of their gay rights single, "Same Love". Lambert's contributions to "Same Love" draw upon her experiences as "a lesbian growing up in a tumultuous, Christian upbringing." Lambert took the content she created for "Same Love" and used it to develop the song "She Keeps Me Warm" which she released on July 30, 2013. A music video was released on Vevo on August 24.

Lambert's songs, often emotionally charged, have been considered a mix of Adele, Tori Amos and James Blake. Her shows are described as "safe spaces where crying is acceptable and even encouraged." Her debut EP, Letters Don't Talk, was released on July 17, 2012, and peaked at number 18 on the iTunes Singer/Songwriter charts. On December 17, 2013, Lambert released her second EP, Welcome to the Age of My Body, under Capitol Records. Lambert's studio album, Heart On My Sleeve, was released on October 14, 2014, and debuted at number 29 on the Billboard 200.

Lambert is scheduled to perform at the 2016 Gay Christian Network Conference in Houston, TX, in January; an annual conference that draws over 1300 LGBTQA+ people from all over the world. 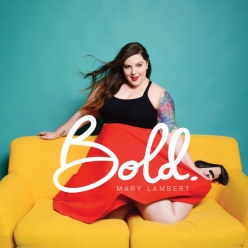 Mary Lambert Heart On My Sleeve