Say Lou Lou (formerly Saint Lou Lou) are a twin sister musical duo hailing from Australia and Sweden. Miranda Anna and Elektra June Kilbey-Jansson (born June 7, 1991) are the daughters of Steve Kilbey, a longtime member of Australian band The Church and Karin Jansson, ex-girlfriend and recording partner of Kilbey (and before then a member of Swedish new wave band Pink Champagne). They grew up in both Australia and Sweden.

Considered dream pop or dream wave, they released their first single in 2012 before forming their own record label, à Deux, in 2013.

In December 2013, it was announced that Say Lou Lou had made the BBC Sound of 2014 longlist.

Over the course of 2012 to 2014, Say Lou Lou released five singles, and their debut album Lucid Dreaming was released on 23 February 2015 in Scandinavia and 6 April 2015 elsewhere. 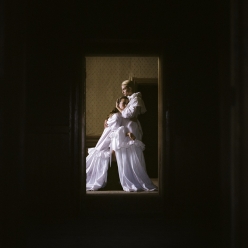 Say Lou Lou Everything We Touch

Say Lou Lou Nothing But A Heartbeat