On October 8, 2008, Mike Williams confirmed that the band had broken up early in that year.

The band had released three albums, one on Solid State Records,[2] one on Roadrunner Records, and one on Century Media Records. They had been signed to Abacus Records for a while until it folded.

In 2000, three Tulsa musicians: Johnny Lloyd, Rod Burguiere, and Daniel Hickman started a band named The Agony Scene. Originally looking to form a Christian metal band in the same vein as Zao and Overcome, Lloyd and Hickman took guitar duties with Burguiere on vocals. The arduous search for a rhythm section eventually exasperated Hickman, who left to join Tulsa metalcore outfit Enlow. Burguiere then looked to his former bandmates Mike Williams and Brent Masters and things began to mesh. The four piece, with Williams on bass and Masters on drums, eventually came across Chris Emmons as a second guitar and the lineup was solidified.

For the first year The Agony Scene made a name for themselves in the Tulsa hardcore scene and playing shows around the Midwest with fellow Tulsa acts Enlow and Plan B. In late 2001, Williams left the band to join Tulsa grind outfit Thirty Called Arson and was replaced by Garrett Grover.

The Agony Scene released their first studio recorded demo in January 2002, which subsequently landed in the hands of Seattle-based label Solid State Records, that eventually granted the band a record deal. Immediately following their performance at Cornerstone that year, Burguiere stepped down from vocal duties and was replaced by former bassist Mike Williams.

Although the band was signed on with Solid State Records for a time, which mostly signs Christian acts, The Agony Scene confirmed in an interview with HM magazine that they were not a religious band.[3]

In late 2006 the band parted ways with drummer Brent Masters and invited Ryan Folden - a Spokane, WA based drummer - to join the band.

In early 2008 the band dropped out of a tour with Himsa due to "some major personal situations that make performing on this tour impossible",[4] according to Himsa's management, It was unknown at the time whether the group has subsequently managed to resolve such issues or had in fact broken up. The group's official website had also been shut down, which furthered the assumption that the group had disbanded. Vocalist Mike Williams put these assumptions to rest by explaining why they disbanded.[5]

On April 25, 2018, the band announced that they have signed to Outerloop Records and will release a full-length album, Tormentor, released on July 20, 2018.[8]

Members This section of a biography of a living person does not include any references or sources. Please help by adding reliable sources. Contentious material about living people that is unsourced or poorly sourced must be removed immediately.Find sources: "The Agony Scene" – news · newspapers · books · scholar · JSTOR (May 2018) (Learn how and when to remove this template message) 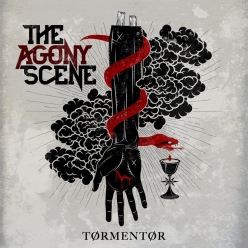